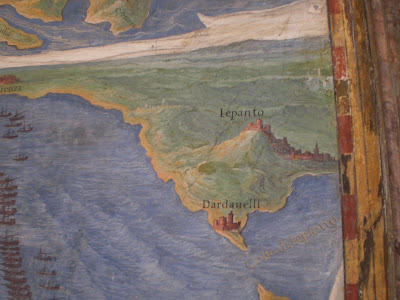 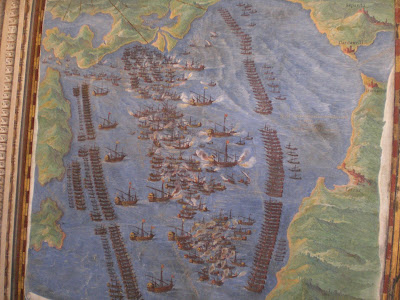 Seven years later and do anyone of us know two bits more about Islam?
If you want to see nice battle of Lepanto scenes see this fresco in the gallery of maps in the Vatican Museums (dates from circa 1580-1583) or see the Vatican's Sala Reale or even the Palazzo Colonna in Rome's historic center.
And of the battle of Vienna...
"Vienna, as we saw, was almost taken and only saved by the Christian army under the command of the King of Poland on a date that ought to be among the most famous in history - September 11, 1683. But the peril remained, Islam was still immensely powerful within a few marches of Austria."
-The Great Heresies by Hilaire Belloc, 1938.
Posted by John Paul Sonnen at 10:11 AM

As I have discovered today on other blogs, this seems to be a general error in the English-speaking world - perhaps Chesterton is actually the source - but the actual victory in the Battle of the Kahlenberg (as it is known in German) was on September 12th, not 11th, which is also the reason why the feast of the Holy Name of Mary is celebrated on this date to commemorate the victory, and the occasion is still marked every year with great solemnity in Vienna (Maria-Namen-Feier, on the following Sunday; this year with the new bishop of Fatima. Also, on the day itself, there will be a Pontifical Mass in the extraordinary form in the Karlskirche, see http://www.gloria.tv/?video=qnc87b6rrmlebr8u9acw). And don't forget the critical rôle of the saviour of Vienna, Blessed Mark of Aviano (most members of the House of Austria [aka Habsburgs] have "Marco d'Aviano among their names).

Il Gassettino (10 Feb 1998) reminds us that the grateful Viennese dedicated to Father Mark d'Avino, O.F.M., Cap., the "capuziner", that is "cappaucino," the beverage obtained by mixing milk in the Turkish coffee found in the enemy camp after the Battle of Vienna and they invented a cake in the form of a half-circle, the Italian "cornetto" in memory of this great victory which was above all religious.

The cause for the canonization of Fr Mark d'Aviano was dashed by opponents to his cause because he was politically incorrect. See Courrier de Rome, June 1998.