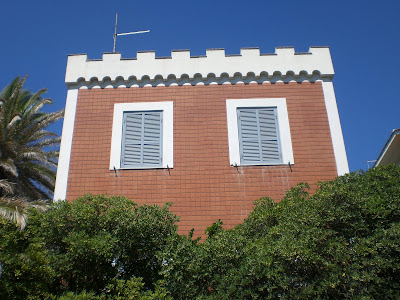 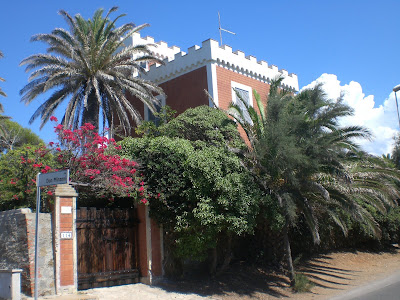 A lot of this has already been lost to history, but I'm told this is the old Petacci summer villa.
Clara, the daughter, had been the mistress of Mussolini (and was later killed with him and so was her brother around that same time). Her father Francesco had been the personal physician to Pius XI.
It's not widely believed, but for years Italian press has reported that her father likely killed Pius XI in 1939 (Eugenio Card. Tisserant belived this as he wrote in his diary). This is why Pius XII wouldn't let a doctor touch him.
"...Twenty-four hours before delivering this address, the Pope [Pius XI] was given an injection by Dr. Francesco Petacci, who worked as the medical practitioner for the Vatican, and whose daughter Clara Petacci was the long-term mistress of the fascist dictator Benito Mussolini. As a result of the injection, the Pope supposedly died hours before delivering his historic attack on Mussolini and European fascism."
-Quote from: http://www.answers.com/topic/pope-pius-xi
Also, the personal physician of John XXIII, Pietro Valdoni, had a summer villa nearby.
Posted by John Paul Sonnen at 6:00 AM

i from santa marinella and i would like to know how did you know that it was claretta petacci home?
regards
franco