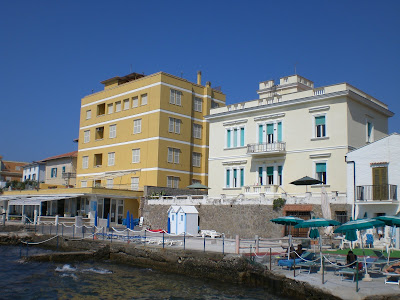 On the left is the old Hotel Le Najadi. A lovely spot, but back in the day it was the big it. In its glory day they had fountains on their private beach, one of the most popular restaurants in Italy and parking, which is rare here!
At that time in the fifties many big films were being made in Rome. Those involved in the film industry came out to the Villa Rossellini in Santa Marinella. Esther Williams of Tarzan fame was here, Gregory Peck, Marlon Brando and others. I'm told this is where they stayed. If you ever get married in Rome this would be a great place to have the wedding reception.
Posted by John Paul Sonnen at 1:11 AM