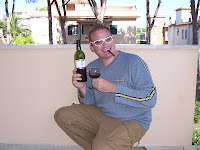 Just two weeks ago, in celebration of the new motu proprio of the Pope, we all had a toast: "Long may he reign!" and then we all sang our Te Deum with much gratitude.

"I welcomed the fact that now we had a binding liturgical text after a period of experimentation that only deformed the liturgy. But I was dismayed by the prohibition of the old missal, since nothing of the sort had ever happened in the entire history of the liturgy. The impression was even given that what was happening was quite normal. The previous missal had been created by Pius V in 1570 in connection with the Council of Trent; and so it was quite normal that, after 400 years and a new council, a new pope would present us with a new missal. But the historical truth of the matter is different. Pius V had simply ordered a re-working of the Missale Romanum then being used, which is the normal thing as history develops over the course of centuries. Many of his successors had likewise reworked this missal again, but without ever setting one missal against another. It was a continual process of growth and purification in which continuity was never destroyed." 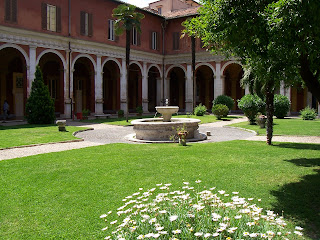 Everybody has asked me for these photos and so here they finally are. This procession of the Blessed Sacrament was held last May at the Dominican University (this is its courtyard) in Rome.
The Rector Magnificus was the celebrant and the students, faculty and staff processed through the halls and concluded with Benediction of the Blessed Sacrament in the main chapel (SS. Dominici et Xysti). It was a joy and I hope you all enjoy these few photos!
Posted by John Paul Sonnen at 5:23 PM 1 comment: 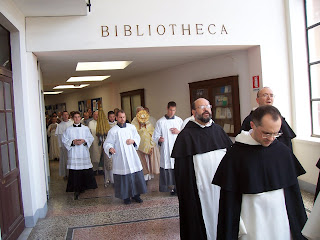 Posted by John Paul Sonnen at 5:18 PM No comments: 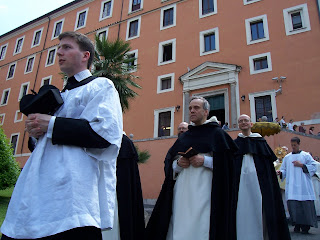 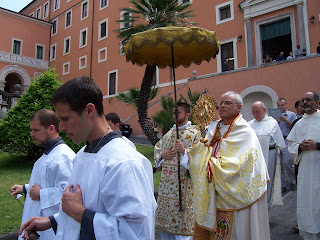 Posted by John Paul Sonnen at 5:12 PM No comments: 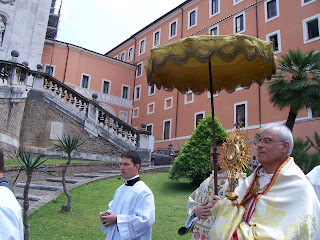 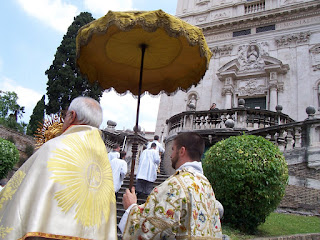 Posted by John Paul Sonnen at 5:08 PM No comments: 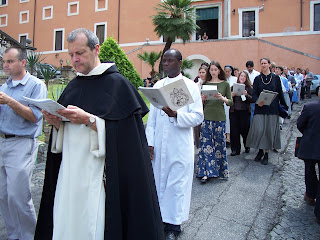 With great joy we sang in Latin during the procession. Why? The answer:
"If even in the great liturgical celebrations in Rome, no one can sing the Kyrie or the Sanctus any more, no one knows what Gloria means, then a cultural loss has become a loss of what we share in commom."
-God and the World, by J. Card. Ratzinger, page 418.
Posted by John Paul Sonnen at 5:07 PM No comments: 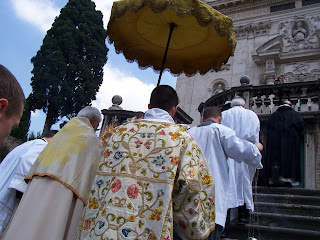 Posted by John Paul Sonnen at 5:05 PM No comments: 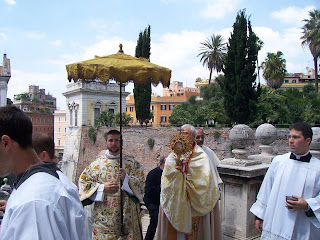 Posted by John Paul Sonnen at 5:02 PM No comments: 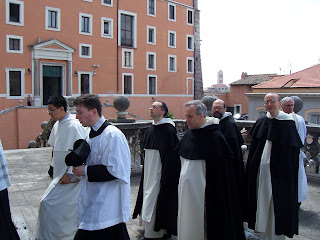 Posted by John Paul Sonnen at 4:57 PM No comments: 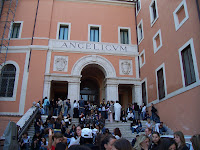 The old Collegio Angelico was on the Via San Vitale number 15 when the young Fr. Fulton J. Sheen studied there. Since the 1930s, though, they've been at Largo Angelicum number 1.
Posted by John Paul Sonnen at 4:39 PM No comments:

A responsive chord: scholarships to give... 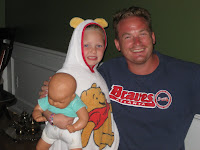 The consequences of being a graduate student of theology today are both terrible and wonderful. The Church is in need of faithful theologians while many moderns and sophisticates fear the danger of a Catholic theologian and the voice of Catholic truth.

God's ways are so simple: like Einstein's E = mc 2, or the Ten Commandments or the Beatitides or the truth we learned in the catechism - but some laymen are needed to teach the sacred science of theology full-time and so we support our next wave of theologians - this present generation of Pope John Paul II and Benedictus XVI.

From far-off Rome I return every summer to be a workingman for wages. Work is good and a sharing in God's own work of creation, a redemptive and redeeming act, noble of itself and worthy of the best in man - even as it was worthy of God Himself in Christ.

As we each eat our bread in the sweat of our brow, as Christ did for far more than three quarters of His life on earth, I petition for some faithful Catholic to donate $2,000 to cover my tuition expences for the coming academic year of 2007-2008 at Rome's Dominican University so that I might continue to study theology there. I will carry your intentions in my heart through the shrines of Catholic Europe! "Lord I believe; help my unbelief."

Back in the fatherland: transatlantic... 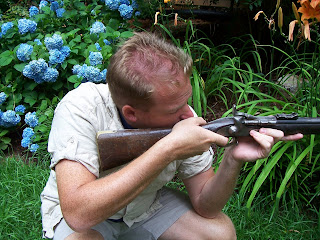 Greetings to everybody! By divine providence, I've made it back stateside and am now back with my Springfield (this is me hunting last week out East on my native soil).
Posted by John Paul Sonnen at 7:45 PM 10 comments:

The Indult: me on the Tridentine Rite...