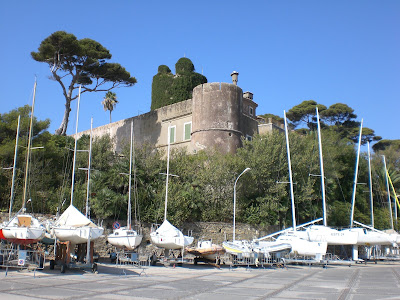 This is the old Castello Odescalchi located at the port of Santa Marinella: http://www.castellosantamarinella.it/. Its original tower and complex was constructed so as to sight and warn the costal inhabitants when Islamic pirates approached the coastline.

Today they just have wedding receptions here (with fireworks if you can afford it!). But it's also famous as it was here that in May of 1938 the famous meeting between the Axis powers took place (and we all know how that relationship ended). The King, Mussolini and Hitler met here and sealed further their alliance which would then two years later be tripartite in Munich. Before their triumphal entrance into Rome they enjoyed here a big lunch around a giant round table on the shady lawn overlooking the sea.

For the Axis powers justice was measured by expediency. If something was convenient, then it was okay. Dare anybody say it, but it's the same thing today with the abortion industry.

Posted by John Paul Sonnen at 1:24 AM