The youth wait to greet the Archduke... 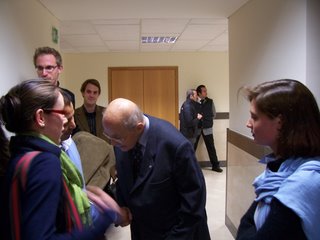 It was such a delight to speak to the Archduke! During this brief encounter in the hallway of Rome's Gregoriana I heard his voice as he chatted in several languages (each "perfectly" as I was told).

SOUTH-TYROL, my friend! ;) tyrol is part of austria, you know, while southtyrol is italy...for now. ;p

I AM SO HAPPY THAT YOUR EXPERIENCE WITH HIRH ARCHDUKE OTTO WAS POSITIVE. HE IS REMARKABLE AND SO HAPPILY RELIGIOUS. I HAVE HAD A HUMBLE CORRESPONDENCE WITH HIM FOR SOME YEARS. HE IS ALWAYS POSITIVE AND FOCUSED....AT 94. GOD HAS BLESSED HIM.