At the reception after the lecture... 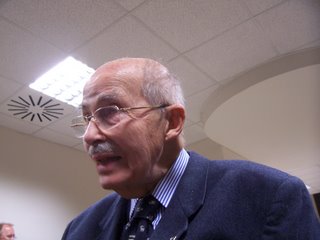 His royal Highness Archduke Otto von Habsburg was a delight to speak to at the reception. He greeted everyone with a smile and a kind word. As he spoke I thought of the words of Dante (epistola VI to the Florentines):

"1. The gracious providence of the Eternal King, who in his goodness ever rules the affairs of the world above, yet ceases not to look down upon our concerns here below, committed to the Holy Roman Empire the governance of human affairs, to the end that mankind might repose in the peace of so powerful a protection, and everywhere, as nature demands, might live as citizens of an ordered world. And though the proof of this is to be found in holy writ, and though the ancients relying on reason alone bear witness thereto, yet is it no small confirmation of the truth, that when the throne of Augustus is vacant, the whole world goes out of course, the helmsman and rowers slumber in the ship of Peter, and unhappy Italy, forsaken and abandoned to private control, and bereft of all public guidance, is tossed with such buffeting of winds and waves as no words can describe, nay as even the Italians in their woe can scarce measure with their tears. Wherefore let all who in mad presumption have risen up against this most manifest will of God, now grow pale at the thought of the judgement of the stern Judge, which is nigh at hand, if so be the sword of Him who saith, 'Vengeance is mine', be not fallen out of heaven."
Posted by John Paul Sonnen at 4:20 AM