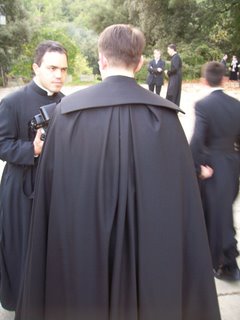 Owing to the influence of clergy who have sojourned or studied in Rome, the wearing of the Roman cloak becomes more and more frequent (Signor Gammarelli can make you one). Clergyman know that the cloak is a nice complement of the ecclesiastical dress outside of church ceremonies (scholastic events in Catholic colleges, i.e. graduation), and has, besides, the advantage of being stately.

Until 1967, when a cleric was received in audience with the Pope, he was required by protocol to wear such a cloak (or at least greca). It was always one of those nice extra touches. Often, these practices have their roots in the old etiquette of the Roman court.

When I grew up as a kid my pastor, Msgr. Richard Schuler, had a few such cloaks. His cappa nigra was from Toomey and his mother made him his one ferraiolone and he even had another one, too, I think (and then a few monsignorial ones, too)!
Posted by John Paul Sonnen at 5:15 AM

I have fond memories of Monsignor Schuler in his Monsignor's ferraiolone and his outer cloak as well. Abito piano was always ready to go, but yet he always had time to hear the little old ladies with full attention. RIP.