The arrival of the Archduke: urbs caput orbis... 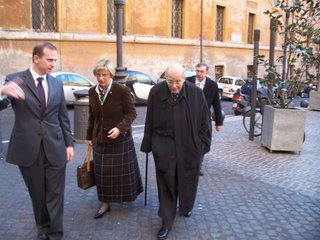 To see such a relic of Christendom living and breathing atop the cobbled streets of Rome: urbs caput orbis!

“A new age of Christendom, if it is to come, will be an age of reconciliation of that which was disjoined, the age of a ‘secular’ Christian civilization, in which temporal things, philosophical and scientific reason, and civil society, will enjoy their autonomy and at the same time recognize the quickening and inspiring role that spiritual things, religious faith, and the Church play from their higher plane.”