History lives as it never ended... 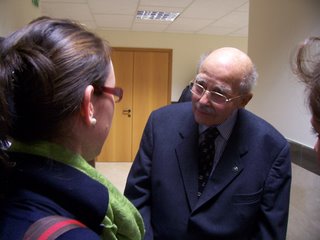 Meeting the Archduke was for me, very much like the two times I met Giulio Andreotti. Both are men in their nineties, both having been gigantic players of the twentieth century, and yet both have the most charm, youth, and humor of any persons that I've ever met (they have an almost teenage spirit).

My thoughts were of the gigantic historical weight of this man. It is now known that just after WWII, Pope Pius XII, of blessed memory, went to Generals Marshall and Eisenhower to look into the possibility of creating a Catholic State encompassing Bavaria, Austria and some smaller German states, with Otto von Hapsburg as ruler.
Posted by John Paul Sonnen at 4:54 AM