The pet of Pius XII: Gretel... 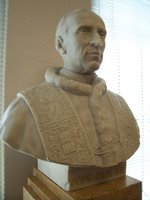 One of his great loves was birds and another was German language. So he combined the two: a goldfinch named Gretel! A goldfinch is a small brightly colored European finch often kept as a cage bird. In the summer the male becomes bright yellow, with black wings, tail and crown.

When he died, during the interregnum, la Popessa brought his beloved cage birds to the North American College where Frank Cardinal Spellman invited her to live for some time before she founded Casa Pastor Angelicus.

Posted by John Paul Sonnen at 5:11 AM

If I'm not mistaken, he should only be wearing the four-horned biretta in his teaching capacity and not at Mass or the Offices. It is (or used to be) illegal to wear anything but a three-horned biretta (or cowl covered by a monastic amice if you were a monk or friar, and your order did not have the biretta as part of your clerical habit e.g. the Friars Minor Conventual or the Mercedarians) at the Mass or hours.