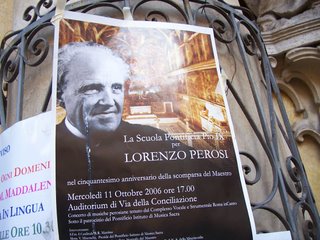 For me one of the greatest perks of this world is to be in the Vatican Basilica, in the presence of the Roman Pontiff (the Patriarch of the West), with the Sistine Choir raising their voices to the heavens with the Tu Es Petrus or Cantate Domine of Don Lorenzo Perosi! I have to admit that I just love his music!

“Perosi was an authentic musician, a man utterly consumed by music. He had the good fortune of directing the Sistine at the time of the motu proprio on sacred music, which rightly wanted to purify if from the theatrics which which it was imbued. He could have given a new impulse to Church music, but unfortunately he didn’t have an adequate understanding of polyphony in the tradition of Palestrina and of the tradition of the Sistine…Today the fashion in the churches is for pop-inspired songs and the strumming of guitars, but the fault lies above all with the pseudo-intellectuals who have engineered this degeneration of the liturgy, and thus of music, overthrowing and despising the heritage of the past with the idea of obtaining who knows what advantage for the people. If the art of music does not return to its greatness, rather than representing an accommodation or a byproduct, there is no sense in asking about its function in the Church…”

-Interview with Msgr. Bartolucci ( www.chiesa.espressonline.it )
Posted by John Paul Sonnen at 5:00 AM

Yes but what about his baritone?

Well I heard his merry baritone converted to Islam...