The entrance decorated for the celebration... 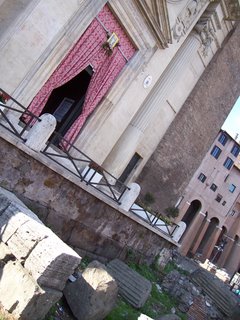 For the Feast of Saint Nicholas the main entrance of the church was decorated with this lovely damask curtain. An icon of the Saint with flowers was suspended on the upper part of the entrance as you can see in the photo (do you like the Roman ruins, too?).

Cardinal Grocholewski was the celebrant of the Mass. He's well known in Rome as the Cardinal Prefect of the Congregation for Catholic Education as well as for being the Grand Chancellor of the Pontifical Gregorian Univeristy. Also, the Cardinal is known as being a talented latinist.
Posted by John Paul Sonnen at 8:56 AM