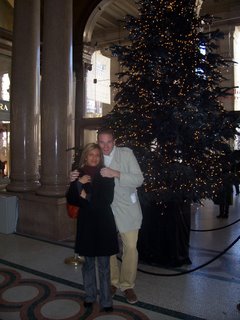 -Six small octopus (small ones, though, as the large ones are used in salads) in a pan.
-Lots of cherry tomatoes in the pan.
-Olive oil, garlic, white wine, lots of parsley and (only a couple) red hot chilly peppers in the pan.
-Cook until the octopus has changed color and looks done (if the heads fall off, then you know you've cooked them too long, but it's still okay).

N.B. This can be eaten as a soup or in pasta and six octopi serves about three persons. Il Natale e tutto tuo when you eat this well!
Posted by John Paul Sonnen at 3:52 AM

thank you, bishop of alexandria! and thanks for the “vita s. antoni,” too - alla prossima!