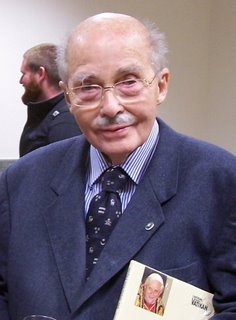 As we chatted I took this photo of the Archduke. He has a splendid sense of humor. "I'm ninety-four years old!" he proudly said. "I was born before the First World War in nineteen-hundred and twelve. In Austria."

It was so special to speak to the Archduke about his father, Blessed Karl I. His father is on the road to the canonical process of canonization and was declared blessed in 2004.

The Archduke spoke of when his father died. He explained how much of it he remembers today even though he was just a boy at the time. He shared with myself and another the story of his father's death in exile and it was so touching for us to think of how his father will soon be likely canonized a saint.

The Archduke shared that sometimes he visits the United States, but that he hasen't lived there in many years. "I went back last year," he explained, "I go back to visit the Hungarian parishes." With pride I then shared with him that I grew up in an old Austro-Hungarian parish, the Church of Saint Agnes (www.stagnes.net). With a smile he replied: "Oh, I've been there!"

Posted by John Paul Sonnen at 5:27 AM

SO JEALOUS! LUCKY BOY! Tell Chris that Jared and I send our Merry Christmas greetings to him and to you of course!

You can only imagine how I envy you!

Thank you for sharing such wonderful photos of the son of saints and caesars.