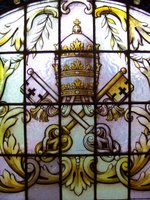 “Unbelievers call themselves rational; not because they decide by evidence, but because, after they have made their decision, they merely occupy themselves in sifting it.”

“The primacy is the bulwark, or rather the corner-stone, of Catholicism; without it, there would be as many churches as there are nations or states. Not one of those who have denounced the papacy as a usurpation has ever attempted to show that the condition which its absence necessarily involves is theologiclly desireable, or that it is the will of God.”

-Lord Acton : Dollinger on the Temporal Power (19th Century)
Posted by John Paul Sonnen at 5:34 AM