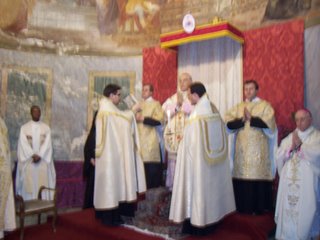 Nice to see the attendants of the Cardinal in copes as they always had been - with the bugia.

It’s a low candlestick with a long handle. It is held near to the book by one of the attendants of the Prelate whenever the latter reads or sings something from the book (except on Good Friday and not used by the Pope).
Posted by John Paul Sonnen at 7:55 AM