The Archduke chats with his admirers... 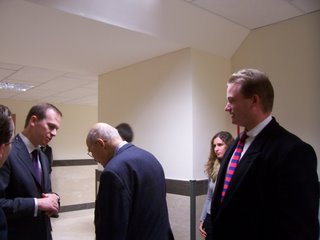 In awe did I watch as the Archduke greeted his many fans. Meeting him was like meeting Babe Ruth!

My thoughts were deep in the the First World War. I thought of his throne which had been lost since 1918 and his giving up all claims to that already-lost throne in 1961.

With hope did I smile upon him while thiniking of how today, gloriously reigning, we have a German Pope from Catholic Bavaria!

It has been a turbulent history for Christendom in these years. Good news, though, as fides vincit!
Posted by John Paul Sonnen at 4:29 AM