The Archduke ponders the crowd... 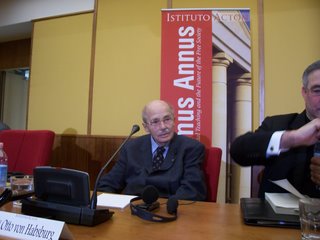 Everyone was delighted by the wisdom and charm of the Archduke. As soon as one heard him speak, the common sentiment was: "this man is a prodigy."

“There are indeed, most august emperor, two powers by which this world is chiefly ruled: the sacred authority of the popes and the royal power.”