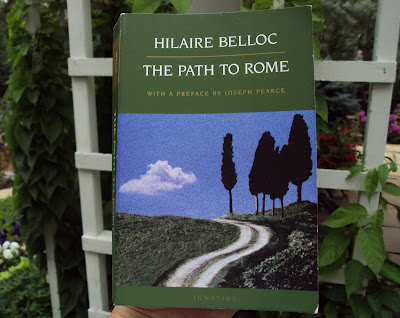 It's difficult for many moderns to even understand or know what "Catholic culture" is.
Read this book and then you will understand exactly what it is.
If I had to write a book of my own adventures in Europe, I would just reproduce this book; it hits the nail on the head.
Ignatius Press reprinted this volume in 2003, but of course it's always fun to get an older edition, too.
This is the story of a young university-age guy who was born in a little village by the name of Toul in a French valley. Raised in England he went back to visit the place of his birth and in the village chapel he offered a prayer and then had the idea and made a vow to walk to Rome by foot, as pilgrims did in the Middle Ages. He went as the crow flies in a straight line from his map (and in the end he did have to take a train twice for just several miles before Milan and then before Siena as he had run out of money).
With the linen clothes on his back, boots, a hat, a cotton jacket and a sack with maps, a watch, sketch-book, a flute, pipes, a card-case, two pencils, a bottle of wine, a cup, a scrap of newspaper, a needle and thread and with no passport, he left on this wonderful journey and such an adventure that befel him! Read a book like this and see why truth is better than fiction and why it is so important to keep Europe Catholic - our Christian continent.
Posted by John Paul Sonnen at 9:43 AM