The Church Architect in North America: E.L. Masqueray and those who now carry the torch... 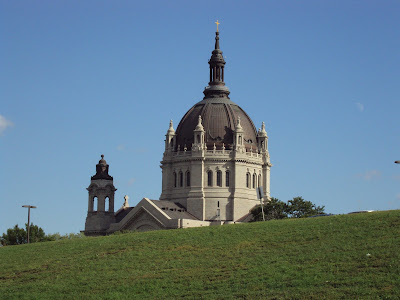 Gauge the scope of beauty seen in this temple built overlooking the upper banks of the mighty Mississippi River and be inspired.
In contrast, as everybody knows we live in an age of milquetoast church architecture.
Indifferent co-religionists are a dime a dozen. And so are dryrot church building and renovation committees who know nothing or too little of Catholic spiritual and artistic influences which they never understood (born of the ages past in large part from the mystical climate of a Catholic continent).
In recent years a remnant has worked aggressively for a restoration and an integral part of this effort has been the modern legacy of the Notre Dame School of Architecture. These guys know their stuff and have played a big part in ending the "tyranny" of modern church architecture as we know it.
Winning the age for Christianity implies a deep commitment to the best church architecture.
Defining the new role today we have a new crop of legends such as Duncan Stroik (http://www.stroik.com/) and Matthew Alderman (http://holywhapping.blogspot.com/) and Erik Bootsma ( http://beatusest.blogspot.com/) who are Catholic architects (men of art who believe and design and build).
It's an easy collaboration: you just need pious and generous laity, talented architects who believe and a dynamic bishop or pastor with the guts. The vitality of Western civilization has already taught us what and how to build.
Archbishop John Ireland led Minnesota Catholics for 33 years. As a young student he had spent eight years of seminary training in France (Meximieux and Montbel) and this is when he became full of admiration for the splendor of Medieval and Renaissance Christendom.
Enraptured with European church architecture he once said: "They were truly monuments of faith and piety, and more eloquently than the most eloquent pages of written history they tell us that in older times the children of the Church were giants in devotion to religion."
In the top photo is the Cathedral of Saint Paul located on Cathedral Hill overlooking Saint Paul, Minnesota. The architect was Emmanuel Louis Masqueray, a man who was able to translate into stone the full significance of the meaning of a great Christian temple.
With his pencil he drew religion's meaning, religion's history, religion's purposes.
Masqueray yielded a score of commissions for the Church in the Northwest and his fine works stand today. His pencilling finger understood Catholic Europe and this helps us to see the value of having a requisite for all serious students of design - they ought to study in Europe.
Masqueray was born in Dieppe, France in 1861 and was raised in Rouen and in 1873 the family moved to Paris. In 1879 when he was 17 he entered the Ecole des Beaux-Arts, the oldest and most prestigious fine arts schools in the world. He then went on to live in Italy for two years and during that time he was able to further develop his understanding of historically minded, highly intellectual architecture. In the 1880s he moved to NYC. In 1905 he moved to Saint Paul, Minnesota where he is today buried at Calvary Cemetery.
The criteria for proper design used by Masqueray were the same as those used by the French philosophical eclectics earlier in his century to test the validity of an idea: truth, beauty and goodness. The latter two, according to the Beaux-Arts tradition, were achieved by following that classical style so familiar and acceptable to the public, the first demanded not only that a design take into account the vagaries of location and climate, but also, and more importantly, that the exterior of a building clearly relfect the purpose for which it was constructed. Finally, once having achieved its desired state, a design was to never be altered. The aura of timelessness and catholicity remain. He knew his stuff. May he pray for us and for the continued restoration in Catholic church architecture.
Posted by John Paul Sonnen at 6:11 PM

E.L. Masqueray also was the architect for St. Joseph's Cathedral in Sioux Falls, South Dakota, which is currently being restored. The architect for the restoration is none other than Duncan Stroik. Check out the website for the Cathedral restoration at http://www.stjosephcathedral.net/ It includes great pictures and videos of the project and its progress.

E.L. MASQUERAY was one of the chief architects at the 1904 St. Louis World's Fair, where he designed many of the ornate baroque fair pavilions and exhibition halls, as well as ornate landscape features.

Archbishop Ireland, on touring the 1904 fair in St. Louis, MO, allegedly solicited Masqueray at that time to design his two proposed cathedrals for the Archdiocese of St. Paul and Minneapolis.

Ironically, St. Louis archbishop John J. Glennon, who hosted the visiting bishops and hierarchy from around the world at the 1904 fair, chose local architect George I. Barnett for the New St. Louis Cathedral (also domed), specifically stating it "was not to be built in the Gothic style" which Glennon thought was overbuilt and overproduced.

All the cathedrals (St. Paul's, the Basilica of St. Mary, and the New Cathedral Basilica of St. Louis) are nationally acclaimed for their architecture--and are listed on the National Register of Historic Places.

We salute your memory, artistry and talent, Emmanuel Masqueray!