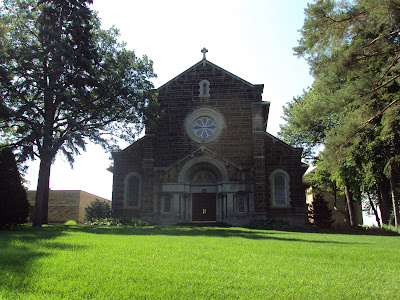 Fulton Sheen was ordained priest in 1919 and during WWI this is where he studied for the priesthood at Saint Paul's Seminary in Saint Paul, Minnesota.

It was in this seminary chapel, the Chapel of Saint Mary, that Sheen began his daily holy hour in the presence of the Blessed Sacrament - a vow which he kept throughout his life until his death in 1979.

"Had you no strength, then, to watch with Me even for an hour?"

Hopefully you will be able to attend the Mass we will be having there on Dec. 9th to commemorate the 30th anniversary of his death and to promote his cause for canonization.

p.s. We met a couple weeks ago at Sacred Heart.