"The most distinguished skyline on the North American continent." 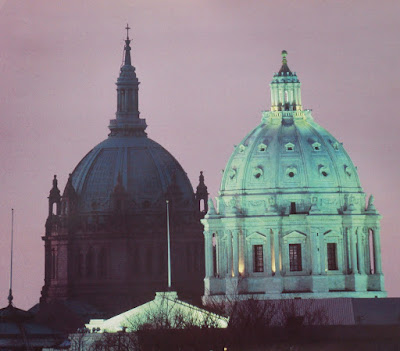 The venerable City of Saint Paul in the State of Minnesota.

May this noble city, named after the Apostle to the Gentiles, blossom into the biggest centre of Catholic life and learning in the Union.

Thanks to an extremely powerful camera zoom this photo shows us the Minnesota State Capitol with the Cathedral of Saint Paul along the city skyline.

Our hope is that the City's University of Saint Thomas will in the future be the Centrum Nationale Culturae Catholicae.

Cass Gilbert, an internationally famous architect, contended that "if the dome of the Cathedral of Saint Paul and that of the new State Capitol were part of the skyline of a city in Europe, they would be world famous."
Posted by John Paul Sonnen at 11:29 AM

Most distinguished skyline? That would be NYC.

In Brasil, there is a big church dedicated to Saint Paul, in the biggest city of Brasil: http://1.bp.blogspot.com/_-gMPbLoDUpU/S0CuxZ1x6_I/AAAAAAAABGI/X78g4eV8XEM/s1600-h/s%C3%A9+sp.jpg