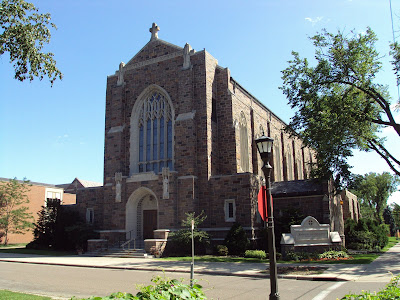 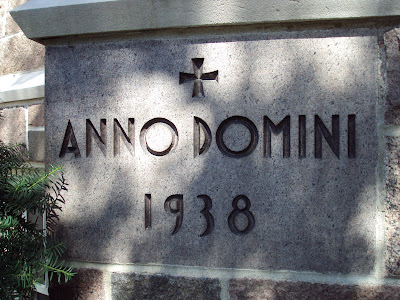 During the brick-and-mortar era in the New World Catholic leadership had the vision (and grace) to construct the combination church-school.
This is the parish church where I grew up, the Church of the Nativity of Our Lord, with attached school and convent. You can see its Gothic with severely simple lines - with an exterior of seven kinds/colors of granite. The cornerstone was laid in 1938.
The first thing the bishops at that time always did was to build a rectory, then a school and then a church, in that order.
The Lord of History had me born into this parish where I received Baptism, first Confession, first Holy Communion and Confirmation.
This is also said to be the first parish in the nation built with an altar "facing the congregation," in the downstairs crypt chapel.
Here's a quote from the original church dedication booklet:
"Members of Nativity Parish should feel proud that they have the first (in these second thousand years) altar facing the people in the United States. They should also be grateful to their Most Reverend Archbishop, who has granted them permission to have their altar so, and to have the recited Mass. Without doubt, there is no better way to show gratitude than by actually assisting at Mass more perfectly."
The basement chapel has since been renovated more than once and nothing original remains. My pastor, Monsignor R.J. Schuler was for fourteen years a curate at this parish and often spoke of his time there as choir director and celebrant of Masses in the lower chapel. At the same time my father was there as an altar server and the pastor from 1948-1956 was Bishop J.J. Byrne, a future Council Father, as later Archbishop of Dubuque.
Posted by John Paul Sonnen at 12:10 PM

What a handsome structure!

Building the first altar facing the people in the U.S. might have seemed like something to brag about back in 1938 but in light of how things turned out the brag would ring somewhat hollow. This very day, the blogs are publishing the letter to his diocese of the bishop of Tulsa Okla., explaining why from now on he will celebrate all his Masses in the cathedral ad orientem.

Altar facing the faithful is the bane of modern liturgy.

Always peering about to not be too Catholic because of course it is better to be agnostico-modern than to look too serious a Catholic.

Bacon said to mix a little falsehood with truth and this is what they did when this pushed this one on the sheep.

St. Helena founded in 1913 in South Minneapolis was constructed in 1940 with the MAIN altar in the upstairs church facing the people.

Also Holy Childhood parish founded in St. Paul in 1946 had main altar facing the people before the '60s.

Minnesota is a testmarket for this kind of thing. As far as we know, this sort of thing was being done in Germany and was envisioned in England, but it took a while for it to get wings, rather like other liturgical abuses which became later, "tolerated".