Legio Mariae: Legion of Mary as seen in Rome... 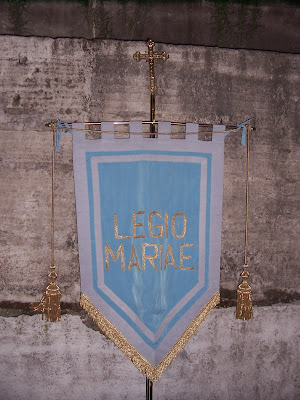 Set up or revive a praesidium at your parish.

See here: http://en.wikipedia.org/wiki/Legion_of_Mary
Posted by John Paul Sonnen at 5:24 AM

Years ago, before I was even born, the Legion of Mary was very popular in the USA. I think it was founded by an Irish layman named Frank Duff, (or something like that).
Anyway, many Philly area parishes had praesidiums, and Legion of Mary banners. The height of the movement was the 1950's, when we had a REAL saint as Pope, Pius XII.

Along came Vatican II in 1962-65, and within a decade, the original apostolate and emphasis of the Legion of Mary was warped into something with a strong emphasis on ecumenism. Membership collapsed, people quit the Legion, and almost overnight, it was gone from most parishes.
Another "fruit" of Vatican II.

But hopefully with the restoration of the Tridentine Latin Mass in the Church and Catholic traditions, the Legion will revive.

With a Pope like Pius XII again (who lived up to his nickname-- "Angelic Shepherd"), the Church and the Legion will revive again.

Are those people in those habits with boots part of the Legion? I saw them on the piazza again on Christmas. I don't know but they had a swarm of Legionaries of Christ greet them as they came in.
I like them all but who is who?
Any relation?

I used to go to a Rosary set up by the Legion of Mary, but I thought it was something to do with St. L. de Monfort

Heralds of the Gospel are the men in jackboots.