The King and I: the Savoia family lives... 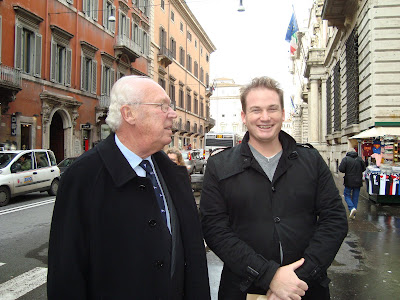 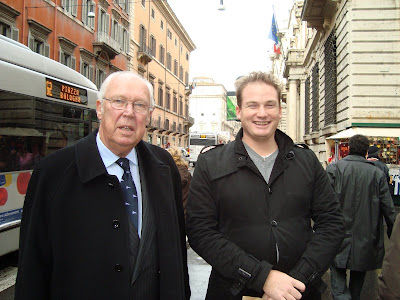 You never know who you might meet while in Rome. After the rain today yours truly was just taking a noon stroll after buying a cool fountain pen when suddenly this guy walked by with his wife. "Hey, that's HRH!" I thought.
Meet the King of Italy, Vittorio Emanuele IV di Savoia (http://en.wikipedia.org/wiki/Vittorio_Emanuele,_Prince_of_Naples).
After WWII he was not allowed to set foot in Italy, but in 2002 the Berlusconi government changed the law and allowed him back in. A lot of history here in the old world!
He's a really nice guy. We chatted as we walked and he asked questions, spoke of San Diego which he likes and he only spoke in English as I spoke in mostly Italian.
After we crossed the Via del Corso he said: "I think I've lost my wife!" as at some point they had bolted ahead and it was a bit funny and awkward for a very long moment as we searched for her until I spotted her smiling way, way down the Corso with her friends.

J.P., my friend, it might be time to invest in a new overcoat (rather than a fountain pen). Especially if you're going to be taking strolls with the King of Italy!

Vittorio Emanuele IV di Savoia? So he's a decendent of that thief who stole the Papal States from the Pope?

I see that the King of Italy could go out of jail for the second time !

Of course, there are many who consider Prince Amedeo (http://en.wikipedia.org/wiki/Amedeo,_5th_Duke_of_Aosta) head of the House of Savoy.

He is not our King! Our pretender is only HRH the Prince Amedeo of Savoia. Vittorio Emanuele is not "IV", is not a pretender and is not a prince.
Read here please http://www.realcasadisavoia.it/

you never fail to amaze us!! still wishin i was there...

it was one italy ´s happiest days when on the 2th of june 1946 people voted against pink Umberto and he and his savoyard gang had to leave the country, which they had handed over to bestialic fascism. Also "Prince" Victor Emmanuel is not somebody who can be seen as a man of good principles:
http://www.corriere.it/Primo_Piano/Cronache/2006/06_Giugno/16/savoia.shtml

For a long time the 'Black' society in Rome (ie. those who supported the Papacy and its temporal claims) had NOTHING to do with the "usurping" House of Savoy, nor with the Italian government on account of the loss of the Papal States, and the bad treatment of Bd. Pius IX.

Whose side are you on, John?!

Francis MacNutt, Papal Chamberlain in the early 20th century, writes a lot about this in his memoirs, which are an excellent read. He was an American too!

This man is NOT Victor Emmanual IV. According to our friend (any many Italians of good standing), he is not even the rightful heir to the throne for having excluded himself by transgressing the laws of his Dynasty and marrying a commoner. Ask our dynastic expert friend!

hang on a sec: his family is not even Italian!

Give the kid a break. What was he to do? Spit on him? Punch him? Like it or not, the guy is royalty, John is American, and it is fun to find a prince in the streets of Rome. If I were you, I would take political/dinastical/legitimist discussions to their proper place.