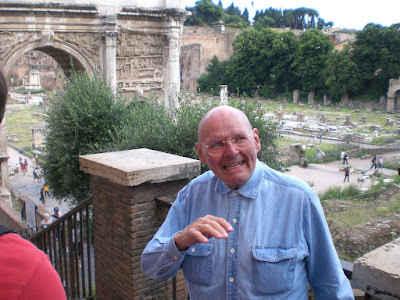 Any news about Fr. Reggie Foster, the Pope's chief Latinist, is always big news. His fans are countless. Many have been asking for an update on his time in the hospital and his surgery which was carried out yesterday and so here's just a quick note.
As everybody knows, some four weeks ago Reggie fell on a Rome street and broke a part of his leg. Just today I saw him in his hospital room in Rome. He's in good spirits and has the right attitude. In short, he's on the road to recovery and doing just fine.
It's a great honor to see and speak with the world's greatest living Latinist. It broke my heart to see him stuck in a hospital bed, just the day after surgery. But, it gives one great joy to know that many good advocates are watching out for him and taking good care of him and that he is doing so well.
Reggie, we love you and get well soon!
Posted by John Paul Sonnen at 11:34 AM

Thanks for the update, John!