From the Vatican: Summer of MMVIII... 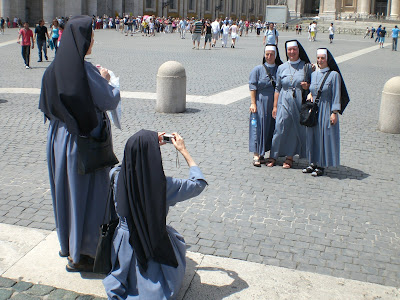 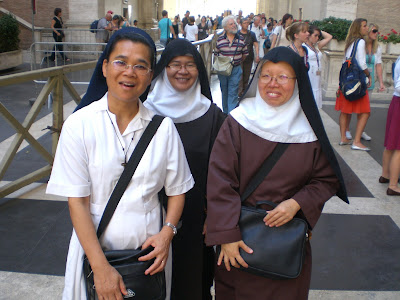 Posted by John Paul Sonnen at 5:07 AM

The first nun is practically habitless, but the other two are true witnesses of the Catholic Church! I'm pleased to see young nuns in the traditional habit, rather than in the updated, abbreviated- to -the- point- of- extinction habit that their companion wears.
It's sad to think of all the hundreds of Orders that have discarded the habit entirely, or adopted a radical simplification over the last 50 years.
Pius XII made a big mistake suggesting simplifing religious habits. Maybe he didn't know the "can of worms" he was opening.
Anyway, I did a lot of reasearch, and before Vatican II, there were Orders of nuns that besides the standard black, white, brown and blue habits (and variations thereof) before Vatican II, there were also 5 Orders which wore red habits (or red played an important part in their vesture), at least 10 that wore varying shades of purple and violet, 100+ that wore grey, 8 that wore royal blue, 1 other besides the "Pink Sisters" that wore rose/pink, 10+ that wore varying shades of light blue, 10 which wore maroon, and 1 which wore green!
Of these 95% no longer wear their traditional habits, but rather have very modernized garb, or secular dress.
Some of the habits were really unique, many were very Medieval looking. The German and French communities in particular had elaborate headpieces. If you thought the Daughters of Charity at one time had unique starched headgear, some of the tiny French or German Orders which were mostly just local communities had starched headgear even more elaborate. But the Italian and Spanish Orders went in for color variations.
Mostly all gone, but perhaps we could recapture it!