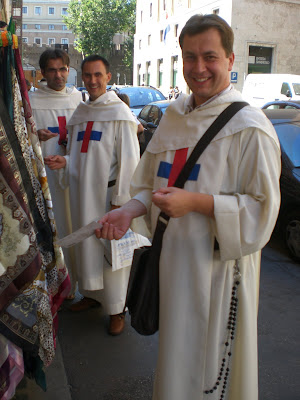 Now who gets the prize for the best mens religious habit?! A sight worth gold, these guys are now an endangered species. Rome had once been crawling with Trinitarian priests, brothers and sisters. Their order has one of the most interesting histories and it's a delight to read about. See them on the Internet.
Posted by John Paul Sonnen at 6:57 AM

I have always thought that the Trinitarian Order has just about the most beautiful habit for religious Orders of men.....with the Discalced Carmelites coming in second.
This photo is wonderful. But I know that the Trinitarians also have a black cape with a red and blue cross on it too. I wonder how often THAT is seen?
The Trinitarians are one of the smaller Orders in the Church (around 650 friars, down from about 1,000 before Vatican II), but they have re-established themselves in places like France, Austria, and Poland in recent years.
The Sisters had a beautiful habit, with the same large cross. But they've modified their garb to the point that it's today not much more than a white dress with a black veil and tiny red/blue cross on a short scapular. Rather ridiculous looking actually...compared to their pre-Vatican II habit.

Is their a particular apostolate traditionally associated with the Trinitarians, such as education, missions, etc...?

The Trinitarians original apostolate was the ransoming of Christian prisoners from the Muslims during the Crusades (11th-13th centuries). The friars would actually go to Muslim countries where large numbers of Christians were being persecuted or jailed, and offer themselves in their place...as well as offering monitary ransom for the Catholic prisioners.
As this apostolate faded after the Crusades, the Trinitarians adapted to apostolates helping the poor, the sick, the marginalized, teaching, missions.
In Spain, the Trinitarians were especially numerous (especially during the 15th-thru 17th centuries), and held many offices in the Spanish INquisition (contrary to biased opinion propagated by Protestants, the Spanish Inquisition was not the barbaric torture claimed, but a judicial enterprise to weed out heretics and to encourage conversion thru trial, and occasional fines and punishments...but the secular goverments were harsher, resorting to torture and executions).
in the 16th century, a more contemplative branch of the Trinitarian friars were founded in Spain. They differed from the original Order in that they adopted brown rather than black capes.
The Trinitarian nuns (which at one time existed in several congregations) were until the end of the 18th century all cloistered branches.
The Trinitarian friars reached their peak of about 6,000 friars in the 16th and 17th centuries. The persecutions by Napoleon, and later Emperor Joseph II of Austria in the later part of the 18th century, as well as other wars in the early and mid 19th centuries did much to destroy the Order, which was down to barely 200 by the beginning of the 20th century.
UNfortunatly, the stricter and more contemplative Discalced Trinitarians went extinct at the end of the 19th century.
The first USA foundation of the Trinitarians was after WWI. One of their first USA priests was an Afro-American.
The Order reached close to 1,000 by 1960, but the disasterous reforms of Vatican II affected the Trinitarians too, and they declined to about 550 in 1980, and have fluctuated between 550-650 ever since. Today they are at about 625.
Unfortunatly, the Trinitarian Order has become rather progressive in some countries (the USA in particular), and has declined here. But new foundations have been made in Poland (where the Order was re-introduced for the first time since the late 18th century in the 1970's), and has been re-introduced into Austria and even France, where the Order had been extinct for 200+ years. In addition to old foundations in Italy, Spain, and Portugal, the Order also has newer foundations in India, Phillipines, Uganda and Nigeria, Mexico, Peru and Ecuador.
The apostolates of the Trinitarians today is care and assistance to the poor, marginalized, and persecuted...as well as staffing parishes and schools.
There are 2 small active branches of Spanish Trinitarian sisters ( unfortunatly both habitless and liberal)- both less than 170 members, an active branch of sisters which wears a very abbreviated version of the traditional habit (about 250 members), and a French branch of the Order which also has few sisters.
The cloistered/contemplative Trinitarian nuns (about 21 cloisters world wide), have very unfortunatly discarded the traditional Trinitarian habit and wear a modified version).
Among the friars, the Order is doing well with vocations in Poland especially, and also somewhat well in Mexico, Spain, India, and the Phillipines.
IN the USA, the Trinitarians are doing very badly attracting vocations...but having gone liberal here what else can you expect?!!

The Trinitarians have charge of one of the local parishes here in the Philadelphia area: St. Ann's, Bristol.

Black cape and hood are worn only in winter season.

Thanks for the comprehensive statement of the history of the apostolate of the Trinitarians. I suppose an apostolate for the benefit of the poor and "marginalized" would tend to make a community quite liberal. One would have hoped, however, that that would not have necessarily meant "liberal" in matters of our Holy Religion. Interesting habit which should be worn and cherished by all members of the Order as the Polish Trinitarians.

I joined the American branch of the Trinitarian Order in June of 1966. I was fresh out of high school & was recruited to the order by the vocation director, a real character named Father Joseph Lupo. This priest became notorious for using his vocation recruiting budget to run a full page ad in Playboy magazine in 1974 or 1975. Newsweek magazine ran a story titled "The Playboy Priest" in its religion page. Father Joe succeeded in recruiting a dozen candidates for the priesthood & thirteen candidates (including myself) for the Brotherhood. I entered with high expectations but I experienced only frustration & disappointment. The Order did not have its act together. Two dozen young men ready to dedicate themselves to a life of service to the Church, but the Trinitarians provided no guidance or training programs. The priests did not attempt to teach us a path to holiness or instill Christian values or anything. Within a year, almost all the candidates left or were counseled out. No wonder the Church faces a critical shortage of Clergy & Religious. It really came apart in the 1960s. I visited Sacred Heart monastery in Baltimore in the summer of 2007. The place is only a shadow of its former self - most of the property has been sold off. It is no longer a training center, but rents itself out for retreats. the 2 priests I met did not wear the religious habit. They had ceramic red & blue crosses around their necks. I often think back to what could have been. I entered the community with the intention of offering my life in service of the Church. In my estimation, the American branch of the Trinitarians have not served the Chruch well.

How can one join the Trinitarians and who has their email contact, especially in Africa and Europe