For the "bags" who studied "sub umbra Petri"... 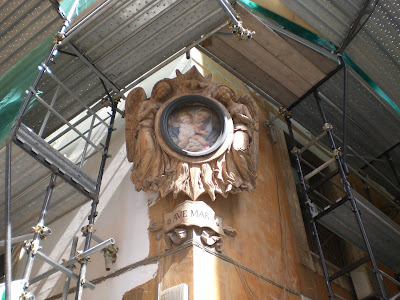 Some readers here are old guys who studied in Rome back in the day. Those from the Pontifical North American College, the "bags," studied here in this collegio (the little house on Humility Street) until Spellman built their new spaceship on the Janiculum.
The North American Seminary in Rome was housed here and opened on December 8, 1859. Pius IX has his palace atop the Quirinal Hill and wanted his seminarians from the New World to be just down the street. Today, it's still a collegio (residece), albeit for English-speaking priests who go to Rome now to study post-ordination. See their site here: http://www.pnac.org/general/casa_santa_maria.htm
The now elderly bags might be happy to know they're now restoring the entire exterior - as can be seen in the photo. Now the "new men" won't even know the old ocher look.
One question for the old timers, though: I have always wondered if this image is a rendition of an Our Lady of Humility or a Vergine Immaculata? Please advise.
Posted by John Paul Sonnen at 2:26 AM

Why is Rome constantly repainting the beautiful ochre? The city just doesn't have the same feel.