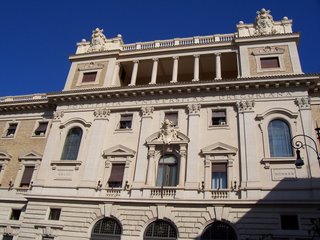 He's famous in the Vatican. His name is Fr. Reginald Foster, O.C.D., a Carmelite priest from near Milwaukee, Wisconsin. He was a student in Rome in the early 1960s, was ordained there, and has lived there since. Since 1975 he has been teaching Latin full-time at Rome's Jesuit University, the Gregoriana. He also is the world's most famous living latinist, having worked in that capacity for four popes for nearly forty years.

Every October Fr. Reginald has a first meeting for his new and former Latin students in his popular upper classroom at the Gregoriana. Typically, over one-hundred Latin students from all over the world are gathered.

This year, the class meeting was a little different. Today, Fr. Foster announced with great regret that his renowned Latin program would no longer be held there, after over thirty years, as per the Jesuit administration.

"Last Saturday evening," he explained, "We received a scrambled e-mail at my residence in Rome (the Teresianum), not addressed to me, but to my superior." The letter explained that, "Fr. Foster would be no longer teaching Latin at the Gregoriana."

The administration had cancelled Fr. Foster's Latin program and substituted another class for that time-slot. Their reason was cryptic: "Too many students are taking Fr. Foster's Latin without paying tuition." True, many of the students were not registered with the Univeristy, but everyone knew how renowned this Latin program was while drawing latinists from all over the world.

Fr. Foster, in good spirits, explained to us today: "Well you see, the Jesuits were rather Jesuitical about the whole thing, now weren't they?" Then, he went on to explain: "I'm taking this opportunity to announce the founding of a new Latin institute in Rome! We don't yet have a place to meet yet, but I'll keep you all informed! Latin lives!"
Posted by John Paul Sonnen at 10:45 AM

Thanks for the update, John! I hope and pray that the new Latin institute works out.

Hope it all works out in the end... Latin forever! :D

He's famous for not wearing his habit...which is part of the tale.

Fr. Foster is undoubtedly a great Latinist and a wonderful teacher. As well as a really nice guy.

Unfortunately, he is also an extremely loose cannon, who feels free to disagree with Church authority and call all kinds of things into question.

If he wasn't such a nice guy/great teacher, I doubt everyone would contort themselves in to pretzels to keep him.

I don't know why no one ever gave him a talking to. Or why he didn't listen if they did. I wish him well, but letting a priest like him staff such prestigious positions was always a problem.

You might be right, but the ease with which Fr. Foster will bounce back, picking up his marbles and playing somewhere else, probably does more to prove that opposition to the revival of the Tridentine Mass is going to be ineffective. The grey-pony tail crowd, Jesuits et al, are on their way down and they know it. Petty antics like this only prove it.

Just found your blog. Great stuff! I was a student of Reggie's in the early 1980s - he saved my life when I was dying of tedium at the Greg.

Thanks to a California Latinist, I just read the news about Reggie. Although he can come across as being somewhat "bitter" at times (as described by another friar at the Teresianum), I've always found Reggie to be a softie.

Oh, and dear Anonymous, please know that not all Discalced Carmelite friars in Rome wear their habits 24/7. Some wear clerics, some wear civvies, and one wears a plumber's jumpsuit - which is more of a habit for him than robe/scapular/capuce. But, not to worry, he preserves his habits in his closet for special occasions.

Among my fondest Roman memories are the times that I was able to walk to work with him from the Teresianum to his office at the Vatican. There's something ineffable about seeing Swiss Guards parting like the Red Sea when Reggie and his guests walk by at the entry to the Vatican Offices; then, make their way to the Segreteria dello Stato's office where the Latinists labor long and chat in Latin in the hallway.

E secondo me, the Gesuiti are shooting themselves in the foot with this decision. Forza, Reginaldo!

I was just curious about his lack of habit. Now that I've read some of the comments, I have a better understanding of the man. I certainly think that it is in the mind of the Church that Latin be preserved. As I understand it, Latin is the official language of the Church. However, I also understood that Rome, under the prior Pope, had instructed religious to wear their habits in public.

Yes, but dear Reggie is often a law unto himself. I read once that says that his outfit (which he buys in Milwaukee while visiting his mother and for whom he wears the habit) costs around $20, lasts about 18 months and requires minimum maintenance. He says that is more in keeping with the spirit of poverty than habits are. I don't entirely agree but then I don't entirely disagree.

Sorry, he is much much more than a nice guy and a great teacher. And since when wearing or not wearing a habit is more important than the integrity and truthfulness of a person, especially with regard to bearing some prestigious position at the church. And anyway Reggie doesn't give a damn as to whether his position is prestigious or not. All he cares is Latin and it breaks his heart to see the church giving up Latin over the years. Challenging authority?... or challenging decisions made by the authority? Tears still run down his eyes everytime he speaks about Vatican II.

If somebody sees Reginaldus soon just pass on my love and gratitude. His Latin summer has made all the difference not only to my teaching but my life.
PS IBVM nuns (jesuit branch) don't all wear their habits either: doesn't stop them doing their good work.

I've known Reginald since we were both 16--lived and studied with him until I had to leave Rome in 1962 and have kept in contact with him since then. His consistency and loyalty to friends, Latin and the Church has been unwavering. The treatment he received by the Gregorian is shameful--though not surprising. He will survive, Latin will survive, but will the Roman catholic culture as expressed in the current Roman environment long be with us?

I like your blog! I was a Fosterite some years back, a grad student spending the year in Rome and studying with Reggie. I was shocked to hear this news and appalled at the Jesuits "Jesuitly" behavior as Foster puts it. But good for him for continue elsewhere with his own academy!

Typical ... the Church is collapsing around us, Reggie finds himself fired, and someone wants to know why he isn't wearing a habit!

According to Roman tradition, he has been talked to by the Cardinal Secretary of State. His comeback, according to that same tradition was priceless.

Yes the previous pope did tell everyone to get into their religious outfits ... and the Americans, Brits, Irish did. Everyone else said "Oh ... he wasn't talking to me" which is what a lot of people said in response to far more important things the previous pope said.

Let's not get tied in knots over the wearing of a habit or gas station attendant outfits. Focus on the important issues!

"Unfortunately, he is also an extremely loose cannon, who feels free to disagree with Church authority and call all kinds of things into question."

What sorts of things does he disagree with the Church authority on?

I am happy to have learned about Father Foster and his expertise and love for Latin. Having studied Latin in high school in the '60's, I am up for a thorough refresher. I just hope Father writes a textbook for us who can't ad Romam venire.
Richard L.