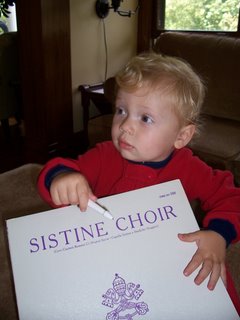 It was a merry Christmas for this little dude! He watched for Santa in the moonlight while telling an elaborate story of how all he wanted from Claus was some help to someday be a true maestro of sacred polyphony of the Roman school! So, Claus delivered!

I’m just happy the little critter got what he wanted (all he talked about for weeks was how “phat” he was with such a record of Vatican polyphony). He now just plays this record (with a repertoire of only polyphonic music) on his great-grandmother’s old portable vic found in the attic!

Trick question for the little squirrely-bird: “Who is the greatest living interpreter of the Roman polyphonic school?” Astounded I was as he laughed and replied: “The Eyetalian octogenarian Monsignore Domenico Bartolucci, appointed in 1956 by Pius XII as director of the famed Sistine Choir!”
Posted by John Paul Sonnen at 5:51 AM