Always under siege, but never taken... 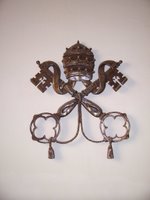 “It is true that Catholicism has suffered grievously from the sectarian division and strife of the last four hundred years, but it has succeeded in surmounting the long drawn-out crisis that followed the dissolution of the mediaeval synthesis, and it stands out today as the one remaining centre of unity and spiritual order in Europe. If Christianity is necessary to Europe, the Catholic Church is no less necessary to Christianity, for without it the latter would become no more than a mass of divergent opinions dissolving under the pressure of rationalist criticism and secularist culture. It was by virtue of the Catholic ideal of spiritual unity that the social unity of European culture emerged from the welter of barbarism, and the modern world stands no less in need of such an ideal if it is to realise in the future the wider unity of a world civilisation.”

-Christianity and European Culture
Selections from the Work of Christopher Dawson
Posted by John Paul Sonnen at 6:59 AM