Hallow your Halloween in Rome with us... 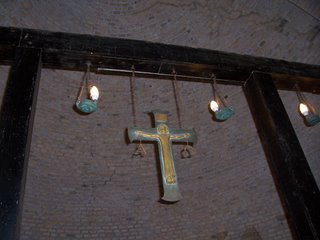 FYI: Solemn Tridentine Rite Vigiliary Mass of All Saints to be held in Roman catacomb…

Those of us born into this modern epoch are rather familiar with the old Orwellian mantra: “old is bad/new is good.” But we just so love the old and this coming Tuesday, October 31, at 4 o’clock in the afternoon there will be sung in the ancient Roman Catacombs of Priscilla a Solemn High Mass in the Tridentine Rite.

The Mass will be sung in the Basilica of St. Priscilla, adjoining the catacomb and convent of the Benedictine sisters on the Via Salaria. We thank the Benedictines for their hospitality as well as the Priestly Fraternity of Saint Peter for hosting the Mass.

In this catacomb is found the very famous fresco of the Madonna and Child, the oldest known representation of this subject. These catacombs, where many popes and martyrs were buried , were discovered in 1578 and they extend for some 13 km and some 40,000 persons were buried there on three separate levels.

Hope to see you all there and happy All Hallow’s Eve!
Posted by John Paul Sonnen at 7:15 AM

Would that we could all be there! Maybe next year.

Very cool! I look forward to seeing a post about it.

John, post maybe the directions to the mass! We are looking to going. God bless!