Roman etiquette: how to greet a Bishop... 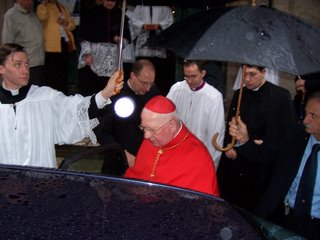 More on the Roman etiquette that we all strive to know and love once we arrive here in Rome:

“Should you bend the knee when kissing the episcopal ring? Yes, if the Bishop is within the limits of his own diocese, as it is a acknowledgment of his jurisdiction as Ordinary. Outside of his own diocese, etiquette requires that he should only permit a low bow due to his character as a Bishop. According to principles frequently laid down in this manuel, it is proper to bend the knee to a Cardinal everywhere, to an Archbishop in his province, and to an Abbot in his monastery; and the same honor should also be paid to the Apostolic Delegate throughout the territory of his Delegation.”

-Costume of Prelates of the Catholic Church According to Roman Etiquette
By John Abel Nainfa, S.S., D.C.L
Posted by John Paul Sonnen at 2:08 AM

Yes, but in ROME there is a specific ettiquite which you don't
mention. It is not proper to genuflect to a cardinal in Rome. This is the reason why
cardinals could wear the cappa magna everywhere in the world, except in while in Rome, where they used to wear it folded-up, since they were always in
the presence of their superior. The current regulation of today forbids the cardinal to wear
the cappa magna at all while in Rome.

Oooops! I made a mistake then. His Excellency was a few miles out of his Diocese.