October 7: Feast of Our Lady of the Rosary. 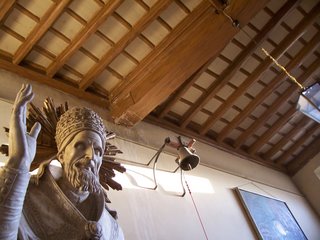 Yesterday in Italy many remembered the anniversary of the famed maritime battle in the Gulf of Lepanto, in modern day Greece. This battle, along with the Battle of Vienna and those in Spain and the Balkans, were a few of the most crucial battles for the preservation of Christendom.

"Soliman II, the greatest of the Sultans, taking advantage of the confusion caused in the west by Luther, had filled the sixteenth century with terror by his exploits. He left to his son, Selim II, the prospect of being able at length to carry out the ambition of his race: to subjugate Rome and Vienna, the Pope and the emperor, to the power of the crescent. The Turkish fleet had already mastered the greater part of the Mediterranean, and it was threatening Italy, when, on October 7, 1571, it came into action, in the Gulf of Lepanto, with the pontifical galley supported by the fleets of Spain and Venice. It was Sunday; throughout the world the confraternities of the rosary were engaged in their work of intercession. Supernaturally enlightened, St. Pius V watched from the Vatican the battle undertaken by the leader he had chosen, Don John of Austria, against the three hundered vessles of Islam. The illustrious Pontiff, whose life's work was now completed, did not survive to celebrate the anniversary of the triumph; but he perpetuated the memory of it by an annual commemoration of our Lady of Victory."

Posted by John Paul Sonnen at 5:00 AM