Team spirit for our Church! 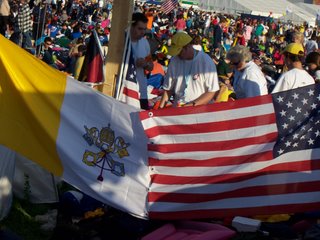 When you visit Rome, buy your family a papal flag! The flag of the Vatican City State was formally adopted as the papal banner under Pope Pius VII in a.D. 1809. Rome has been at work changing continously for twenty-six centuries. Meanwhile, the Vatican City gives evidence of the glory of a civilization (Christendom) whose influence has spanned the globe. Such titanic international prominence the Church has maintained! One of the Vatican's greatest resources is its permanence. Art may fade, economics grow and decline, etc., but the Vatican itself endures through one changing world after another! Can I get a horah for our team!
Posted by John Paul Sonnen at 5:38 AM