Borne by the winds... 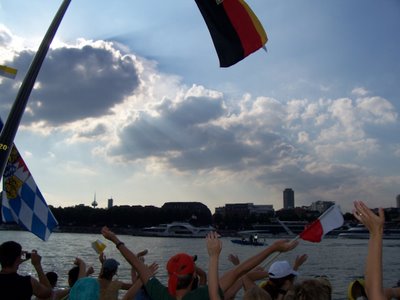 To the tune of "Scotland the Brave!" One of the greatest events in the annals of modern European history was unwinding at this moment! Dorthy once exclaimed: "There's no place like home!" ...but as we over 1 million Catholic youth waded into the cool waters of the Rhein River in Colgone, the new German Pope was sailing up from the horizon riding atop a gigantic ship to greet us! History in the making every day of the year? It was the new German Pope's triumphal return to the Fatherland! With the sun glinting on his golden pectoral cross, we all cheered like angels in heaven!

Through the Sede Vacante/interregnum in April, we all knew that the XX World Youth Day was just around the corner in August. Many of us had a hunch that the Holy Ghost had his eye on der Panzer Kardinal, as he was known with affection! Does God deliver or what?!

Petre amas Me!
Pasce oves Meas!
Posted by John Paul Sonnen at 1:42 AM