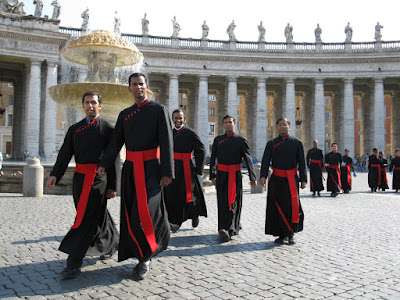 Always nice to see the national colleges looking sharp with team spirit at every papal event in Rome. That is, everybody except the Americans - the NAC brass says to leave it on the football field.
Sadly, the NAC leadership - the seminarians complain - is still stuck in the "ogni cosa diventa politica" footprint and so American seminarians in Rome are still not allowed to be caught in public wearing the college habit (or they will be threatened during evaluations with a "formation issue.") Sad, but hilarious, too. At least the seminarians who have to live under this wierdness can still laugh at the incongruity of such a seventies policy (coming from the brass who are the ruling class elite).
Posted by John Paul Sonnen at 11:00 AM

NAC "brass" has been sour for years. They accepted and adapted to the societal changes of the decade and never got over it. It will take a new generation of bishops on the b of d to bring change and Dolan in NY.

Wasn't Dolan one of those, while NAC rector who frowned on the college habit very harshly?

Well, these guys who were formed in Vatican II, grew up hating Catholic tradition, Latin, devotions, religious habits, tradition, devotions, prayer etc. etc. are now mostly 60+. Within a few years, their generation will be gone. And a more conservative/traditional group will be in. IN thirty years, the Church will be like Vatican II never happened at all. Everything will be back as in Pius XII's day.
Some of the radical Orders which have clung to the "Spirit of Vatican II" the hardest will be gone (Jesuits, possibly the Franciscans except for a tiny remnant, the Augustinians, Holy Ghost Fathers, White Fathers, Sacred Hearts Fathers, Salesians, Sisters of Mercy, Franciscan Missionaries of Mary, Religious of the Sacred Heart, Daughters of Charity, Daughters of Wisdom, the Paulists, Maryknoll, etc. etc.). But growning traditional Orders in habit will be there to take their place, and those that never changed or bought into Vatican II very much will still be here.
IN less than 10 years, the USA sems will be able to walk thru Rome in their college habit again, and miracle of miracles, we might even see the scarlet red cassock of the German-Teutonic Seminarians again.
The radicals of the Vatican II era (1962-1975) are all elderly now. Most of the priests caught up in all the garbage are now in their late 60's and 70's. That includes Bishops and Cardinals. The nuns, in their 70's and 80's. They have very, very few young recruits sharing their mission. But there is an army of traditionalist Catholics.
The dying out liberals know it, fear it, and hate it.
We MIGHT not get a conservative pope at the next conclave (hopefully not for 10 years), but his reign will be shorter than John XXIII's was, and after him...."The Great Return".

That will change soon enough though.. probably very soon as the US episcopate is rapidly changing. You're quite right about them getting written up - but as Fr. Groeschel says, the worst part about being a priest is the seminary... you have to put up with alot, but once you are a priest, then you're in control and you get to decide how you will carry out your priestly ministry.... i dont quite agree with the comment above, Dolan is very much a moderate..orthodox, but a moderate on matters liturgical at least. He was quite happy to oblige to the Brass' complaints about the more traditional seminarians while he was rector in the 90's. Happily things are changing and the tide is rapidly turning...

What you say about the American seminarians sounds familiar. Check out this photo of what seems to be the ENTIRETY of the student and teacher complement at the seminary in Linz.

Clearly none of these men have a "formation issue", right?

In fairness, I've never heard anyone at NAC even suggest he would like to wear the old habit. Cassocks in general may cause a little friction (but are always allowed at Papal events) - but the house cassock? No.

Americans as well as any other should be able to wear their habits in public at any time they so choose...Whether taking a subway or walking the streets it is a good way to remind people that the Catholic faith is alive and well...It also serves as a visual reminder to Catholic people's of their faith during the day when they may not otherwise think of it. Priests and seminarians need to know we love and respect them, for they are Holy indeed. How can we remind them of that when we can not tell them apart from the average guy on the street? Too much has already been erased from the public square, do not allow the ban on the habit to continue..I appeal to all who make these decisions. Maybe a student or Father in habit would garner 5 more smiles or nods of respect throughout the day..Isn't that reason enough! Linz is disgraceful, I'm sorry.

Regarding the Linz seminary photo, it is worse than I thought.

Terrible, absoultely terrible what has happened to the Church in Austria, in Linz, Vienna and elsewhere.

Worse still, that the Austrian bishops, Cardinal Schonborn etc. were recieved with no chastisement or condemnation in Rome this week By Benedict XVI during two days of meetings. A disgrace that they were not strongly reprimanded.

Worse still, was that Cardinal Schonborn was permitted to present the Vatican with a disgraceful petition from Austrian Catholics requesting married priests, women deacons(deaconesses), among other garbage.

Still worse, that Benedict XVI honored this Schonborn person as his special envoy at an historic Mass and celebration in the Czech Republic. Instead, Schonborn should have been sacked as Archbishop of Vienna.

Dolan is left of center. In Milwaukee, he tolerated all kinds of aberations with the priests, except for those who were not loyal to Weakland. With those priests he was very harsh. He also is a man who has no internal convictions.

I assume the men in the photo are not wearing the habit of the North American College? If so, would you share a photo of seminarians wearing the PNAC habit? I could not find one on their website (http://www.pnac.org/). Thanks.

After ordination they don't wear it.

That's right. The national cassocks for each of the Pontifical Colleges(Seminaries) in Roime is worn only by seminarians. It's their uniform. After ordination, they would wear an ordinary black soutane/cassock.

I think that the USA NAC habit/cassock was blue with red buttons, the Scots College have a shade of blue/violet, the Pontifical Roman Seminary had violet soutaines (like Monsignors....and they still wear them at Papal ceremonies), the German Seminary had those wonderful scarlet cassocks and black sashes, the Irish had a black cassock and green sash (which they still wear), the French College I think also had a shade of purple. There is one College that had a black soutaine and yellow piping and buttons...but I forget which one (maybe Poland, Czech, or Hungary). Sorry, I forget.

"Dolan is left of center. In Milwaukee, he tolerated all kinds of aberations with the priests, except for those who were not loyal to Weakland. With those priests he was very harsh. He also is a man who has no internal convictions."

I suspected this. And this is the type of man Benedict XVI gagve to NYC and who probably will be a Cardinal? UGH.

No internal convictions? Sounds almost diabolical! But then again, he's a man of Vatican II/Novus Ordo so what can we expect!
At least he's nearly 60!

I did some Internet searching on this topic and found a few interesting items.

From a comment on Fr. Z's blog, the NAC habit is described as "a double-breasted black cassock, with blue piping and buttons, a crimson sash, and pendant strings."

Page 24 of the Winter 2004 issue of the NAC magazine features a nice article by Fr. Dellaert ('05) describing the history and symbolism of the house cassock.
http://www.pnac.org/general/magazine/archive/04-05_winter/winter_2004_final.pdf

A blog post by Zadok the Roman in February 2005 describes the house cassocks of several seminaries in Rome.
http://zadokromanus.blogspot.com/2005/02/lost-feature-of-ecclesiastical-rome.html