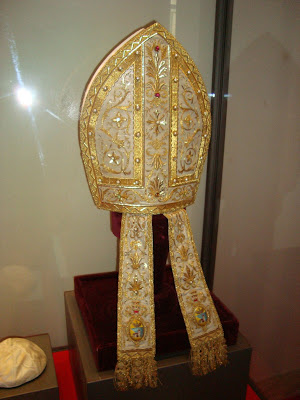 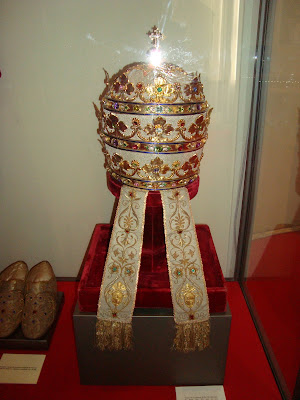 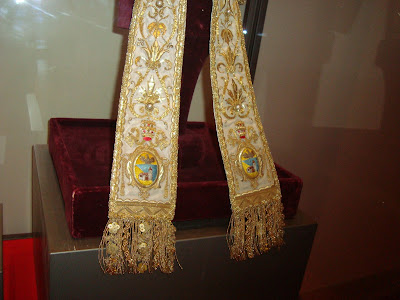 Irresistibly gorgeous. And why? Because we give our best for the sanctum sanctorum (the sanctuary - the holy of holies).
Mitre of Benny XV and tiara of Pius IX, both used by Pius XII from 1939 on.
Posted by John Paul Sonnen at 11:17 AM

I am so looking forward to this exhibition's next stop - which will be directly here in Berlin, from January 22, in the Charlottenburg Palace. And the Catalogue will be published in German, too.

This is wonderful. I wish Pope Benedict XVI would beging wearing the Papal Tiara. Not likely.

But maybe the fanon, and the Sedia.

These conferences and exhibits , and the huge Papal Mass in honor of Pope Pius XII was stunning, magnificent, and overwhelming.

But look at who wasn't really commemorated. Although they had a Mass for him (celebrated by a delegate and a brief Papal appearance), there was no Papal Mass, exhibits, or huge commemoration of John XXIII either on the web, EWTN-TV, or in any Catholic newspaper....except maybe the liberal National Catholic Reproter rag.
Noting. Not a mention of John XXIII. Nada.
How times change. For the better.