Of dazzling luster: the glare of this tomb... 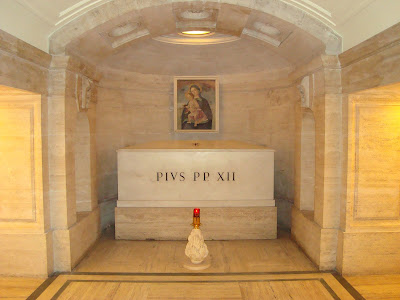 Ever since my first trip to Rome just ten years ago, in 1998, I have felt a certain peace at this tomb, the tomb of Papa Pacelli.

He was a native of Rome. As such, he had a certain affection for Paul's letter to the Romans. And what does chapter three verse two read? "...the Jews are entrusted with the oracles of God."

Only an idiot, a bigot or a tool would say he was "silent" as he screamed for peace year after year.