From Rome: envoking the great noir films of old... 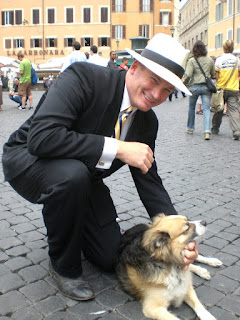 Hats always look nice on ladies and gentlemen. They say formal mens' hats went out of fashion with the Kennedy administration as the President didn't like to be photographed in a hat as he was embarassed with how large his round face and head were as seen with a hat. Anyways, the sixties being over, I guess it's okay to wear a hat again!
Posted by John Paul Sonnen at 9:15 AM

Hats out of style? Sinatra would turn over in his grave!
Was it Chesterton who said, "You can tell a great deal about a man by the tilt of his hat." ?

Hats will never be out of style. I wear a fedora everyday and wouldn't have it any other way. You look good! *tips hat*

I'll have to bring out my skimmer with school colors.

I started wearing hats about four years ago when I got tired of being cold in the winter. There is a great theological mystery: why is it that one feels the cold so much less when wearing a hat? Even, this is the crux of the mystery, one's ears are less cold with a hat, even though the ears are not covered. Men of old knew that hats kept them warm, and now men, even bald men, wear no hats on the most bitter cold days, and their lips are blue. Are we really smarter now?