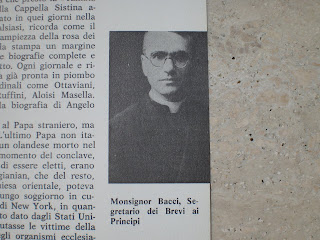 Even though Latin has dwindled to the brink of extinction, even with the Latin-speaking Catholic being an endangered species, we must remember that we have a patron saint of Latin!
Meet the young Monsignor Antonio Bacci (later Cardinal) of the Segreteria dei Brevi ai Principi (see 1917 Code of Canon Law, canon 264). He was, they say, the greatest Latin prodigy of the century.
Today, everyone stands awe-struck with the genius of Fr. Reginald Foster, who is the finest living Latinist (and also famous for his irascible stream of rhetoric). Foster was a member of the last generation of seminarian which was immersed in Latin morning, noon and night (he had fourteen years of Latin before he was ordained). But the upper echelons never listened to Foster's plea to save our Catholic tongue (our inheritance) and so we have a lot of work to do to bring Latin back into our Catholic families, and sacred rites.
Before Foster, there was Bacci. For many years Monsignor Bacci was the Segretario dei Brevi ai Principi (pro. litt. in forma brevi ad Principes Secretarius). In this capacity he had an ordinary audience with the Pope every first Friday of each month. His office was in the Apostolic Palace of the Vatican. He worked with a team of four (three were laymen) and they put everything into Latin through the 1930s, '40s, '50 and '60s.
In the 1990s the Latin Liturgy Association translated the autobiography of Card. Bacci into English and it was a fantastic read. So if you can get your hands on it, then please do. Also, in 1963 he had the fourth edition published (by Editrice Studium) of a Latin-Italian dictionary of modern words which he had put together which was entitled, LEXICON Vocabulorum Quae Difficilius Latine Redduntur.
"Until 1967, the office of the Latinists enjoyed its own distinctive title. It was known as Epistoles ad Princeps - Briefs to Princes. The titles were taken away in a fit of modernism, and scholars like Fr. Foster were listed by their minor official rank in the Annuario Pontificio, the Who's Who of the Vatican. The scholar who held the last title as chief composer of the Briefs to Princes is now over ninety years old. The man lives in retirement in an apartment behind the Vatican, and when he dies, the old title will expire with him. 'He's the Last of the Mohicans,' said Fr. Foster, with an unerring instinct for the least apt comparison, a sign that thirty years in Rome have not touched him profoundly."
-Romans Their Lives and Times, by Michael Sheridan, c. 1994.
Posted by John Paul Sonnen at 11:53 PM

I read that Fr. Foster, though a Latin scholar, has no love of Latin in the Mass, and definitly no love of the Tridentine Latin Mass.
I have read several brutal and insulting comments he has made towards the TLM, the Motu Proprio "Summorum Pontificum", and to traditionalist Catholics.
His Order, (Carmelites) unfortunatly has bought very heavilly into modernism and liturgical improvisation. They've declined greatly. The Discalced Carmelites have declined by about 700 since Vatican II, but the Calced (or original Carmelites), have declined by over 1,200.

Describing the supression of the office of "Latinist" in the Vatican in 1967 as a fit of "modernism" was extremely polite...but accurate. I congratulate your polite description for the destruction...and your diplomacy. But in fact, there was no justification for the wholesale discarding by the incompitant and radically liberal Paul VI and his cohorts for the damage done to the entire Church after Vatican II (liturgy, religious life, Papal court, Vatican offices etc etc.)...even down to the vesture of Popes, Cardinals, Bishops, Abbots, priests...and nuns.
It was a wholesale vandalism...destruction on a massive scale. For which there is no excuse or reason sufficient to explain for it.
Since the election of Benedict XVI, small remnants of all this are re-surfacing (I've even seen pictures of Bishops wearing their purple taburros(winter heavy cloaks) and even buckle shoes and purple mantelletas...all supposedly banned by Paul VI.
The old guard liberals in the curial and what is left of the Papal court hate and revile these things, but the young men are bringing them back....I think fully know and supported quietly by Benedict XVI.

Cardinal Bacci was a great man. I think it was he and Cardinal Ottaviani (two great Cardinals whom Paul VI treated distainfully), who warned this Pope as to the errors of and the disaster that would follow the promulgation of the neo-Protestant Novus Ordo. All to no avail.
The rest is history.

Thank you for honoring a great man like Cardinal Bacci ! He is more and more appreciated, especially by young Catholics.

JP, the official name of the section of the Vatican where the Latinists worked was actually called the "Secretaria brevium ad principes et epistolarum latinarum".

Thank you for this great post about Cardinal Bacci. He is a figure about whom I would very much like to know more.

If you can get it while in Rome, I think that you would very much enjoy reading Recollections of the Last Four Popes by Nicholas Cardinal Wiseman. He too reports about Latin secretaries - though in this case, of the 19th century. (Wiseman himself was a linguist of some distinction. By our standards today, he'd probably be considered brilliant.)

You mentioned a biography published by the Latin Liturgy Association? I'm looking around for this on the net, but I can't find mention of it anywhere but on your blog. Do you happen to have the citation information? I'd like to track it down.

The autobiography of Cardinal Bacci is a fantastic read. E-mail the Latin Liturgy Association and ask if they have an extra copy. If they don't maybe they can xerox it for you. In the mid-1990s I got it from them. It was just a paper pamphlet with no publishing house, etc., so no citation info.

JPS, do you have access to a photocopier that can make PDFs? If you could turn it into a PDF, it could be circulated among more folks privately, or, if it's not under copyright, we could make it generally available.

brother:
well, i don't even have my copy anymore. but i hope somebody at the latin liturgy association still has one as it could be easily photocopied and distributed with ease.

Between Bacci and Foster was a towering figure among the official latinists of the Roman Curia, the Abbot Carlo Egger of the Canons Regular of the Lateran Congregation of the Most Holy Savior. A holy and gracious man from Tyrolean Italy, he was a gentleman to his fingertips and held his students spellbound by his wit and erudition. He went home to the Lord not long ago, but will never be forgotten by those who had the honor of knowing him.

Cinncinate, any idea where I could read more about Egger (in English - or Latin)? It sounds as though he was a wonderful man.