The book that made me... 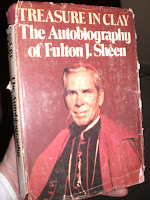 During our formative years we've all read books (or even seen films) which helped to form us into being the people we are today.
A book can have a powerful influence on anybody. It was after reading this book as a high schol student that while still a college student I was led to follow his footsteps to Peoria, Washington, D.C., New York City, Rome and then later as a graduate student to Lourdes, the Holy Land, London, Louvain, etc. He's the one who got me into graduate school and got me to study the sacred science in Rome.
He's our American saint. He always said that it was his "daily holy hour" in the presence of the Blessed Sacrament which made him. This he began in Saint Paul, Minnesota, in the seminary chapel which still stands today.
Visit his tomb under the main altar in the crypt of the deceased prelates in St. Patrick's Cathedral in N.Y.C. and ask him to pray for you and for your families. He was the most brilliant orator which the Church ever produced in our modern era. See his site here: http://www.archbishopsheencause.org/
Posted by John Paul Sonnen at 2:33 AM

On such recommendation I'm just going to have to read it!

I'm a great fan of Fulton Sheen, but didn't know of this book. Thank you!

Thank you for the recommendation. I'm ordering my copy right now!