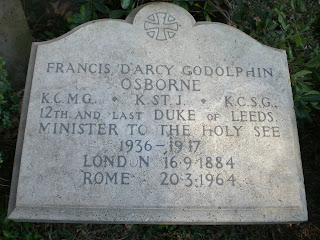 Pilgrims/tourists sometimes ask: "What do we do in Rome during riposo (siesta) while everything is closed?"
My reply follows: "Spend an afternoon in the Catholic cemetery at San Lorenzo (Policlinico metro stop) and then another afternoon at the Protestant cemetery at the giant pyramid (Piramide metro stop). You won't regret it."
A few days ago I spent a sunny, lazy afternoon in the Protestant cemetery. That's where I took this photo. Sir D'Arcy Osborne hid in the Vatican during the war and has an amazing story.
Posted by John Paul Sonnen at 7:31 AM

I see he claims K.St.J. - Knight of St John. Now is that the English Order, the genuine Catholic one, or (since he is also K.St.G.), both?