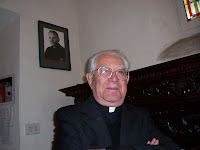 In Rome some legends still live - even today. The joy is in meeting them and seeing their holiness.
Meet Mons. Giacomo Orlandi. He was born in 1922 in a little village near Rome, Roiate. It's a town that St. Benedict even once visited.
Mons. Orlandi has seen alot. He was ordained a priest in 1945. He still remembers when the Nazis took over his seminary in Subiaco to use as a hospital for their wounded. He went on to be a celebrated canon lawyer, worked in the Vatican and was a pastor in Rome. Then, he came to know the future Pope John Paul II.
In 1959 he was nominated a Beneficiato del Capitolo Lateranese and then a Cameriere d'onore di Sua Santita' the same year. Later, in 1983, was named a Prelato d'onore.
He was secretary of Cardinal Bracci, whose titular church in Rome was San Cesareo in Palatio, situated on the Via di Porta San Sebastiano (Circo Massimo metro stop). This church had been abandoned and was in rough shape. Mons. Orlandi renovated the property and revived the parish. Today, it remains a thriving parish church with one Sunday Mass and many weddings often celebrated there.
On June 26, 1967, the new Polish Cardinal, Karol Wojtyla, was gifted by the Pope with this as his titular church in Urbe. In February of 1968 he took possession of it with great solemnity (the photos are fantastic). Today, San Cesareo is the titular parish of another Pole, Cardinal Deskur. Mons. Orlandi, ever the humble parish priest, remains the rector.
Mons. Orlandi always kept in contact with Pope John Paul II and they saw each other several times between 1978 and 2005. Mons. has many lovely photographs, letters and telegrams from the Cardinal who became Pope. It is a treat to chat with him, to hear all the old stories and even to see his immitation of how Cardinal Wojtyla reacted when he was first shown his new cardinalatial coat-of-arms on the facade.
A special moment, for me, was when Mons. gifted me with an autographed copy of the same little book in which he gifted Cardinal Wojtyla with, which he published in 1965 (entitled San Cesareo in Palatio by Pietro Tomassi).
Posted by John Paul Sonnen at 10:17 AM