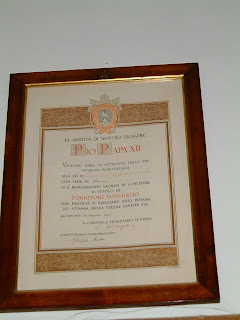 Bigots, fools and "useful idiots" (in the words of Vladimir I. Lenin) bash Pope Pius XII.
Here's a letter which was from his Secretary of State dated 1942 - when the outlook of the war was still bleak.
This document was sent to the Ditta Annibale Gammarelli (his private tailor and tailors to the Pontifical Household since 1798). They are a Roman-Jewish family with their store near the Pantheon.
In the letter the Gammarelli firm is gifted with the title "Papal Suppliers" with the permission of displaying his coat-of-arms (i.e. as one can see in the UK with the "By Appointment to Her Majesty...Suppliers of, etc.").
Posted by John Paul Sonnen at 9:27 AM

The Gammarelli are Jews?

The Gammarelli are not jews!

Someone could tell me what is a Jew ?

Jesus was a Jew?