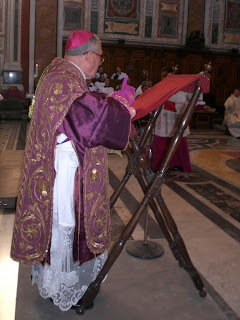 He's known for being a brilliant canonist and an eminent Vatican employee. What many don't know is that he is also one of the most eloquent preachers in Rome.
During the rite of Ordination he preached from the ambo where the microphone was. He mentioned that he, too, had been ordained a deacon there in 1951 by Cardinal Micara while a student at the Lateran.
He spoke lots of the Madonna, the Church, trust and virtue. Then, with great humility, he asked the new deacons to pray for him, the Archbishop, that he, too, might have the grace to persevere in his vocation - to the very end.
Notice that he preaches without notes. His nickname is "Il Sardo" as he's from the Italian island of Sardinia.
Posted by John Paul Sonnen at 2:26 PM