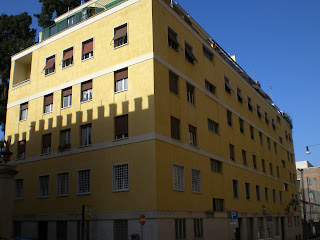 This is the dreaded Gestapo prison/house of torture on the Via Tasso.

With the 1983 made for television film, The Scarlet and the Black, many Americans visit Rome with thoughts of the 270-day Nazi occupation of Rome. The Nazi regime lasted twelve years and for nine months they had Rome.

Meanwhile, "the past is never dead, it's not even past." The abortion industry thrives today and people get angry when you question such evil...
Posted by John Paul Sonnen at 7:17 AM