Papal portrait: the mantle over the fireplace... 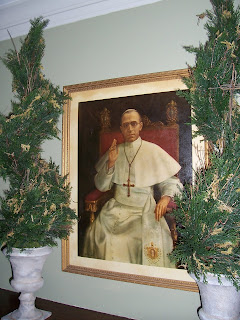 As a freshman in high school I started collecting Catholic items found in antique shops. I did this for two reasons: many of these items are blessed and many end up in the wrong hands. It's a great hobby and I encourage other young Catholics to do the same.
In the mid-1990s I got this treasure from an antique shop back home. It looks great over the fireplace, doesn't it?
Such a portrait would look great in a rectory, episcopal mansion or cardinal's palace. In the old days such a portrait was found in the home of every cardinal, with a chair facing it. The idea was that when the Pope would visit, the chair would then be turned around and used as a portable throne for the Pontiff.
It's the good old days that many of us mancare...
Posted by John Paul Sonnen at 8:42 AM

Very nice. Who is the artist?
-Al

JP,
I am wondering if this picture is a print on canvas?

I don't remember the name of the artist or even if it says. It's not canvas, but a special print. I think it dates from the early 1940s. It was made from a published photo, which I have seen, from 1939, if I remember correctly. I figure it was mass produced.

Nevertheless, it is still a beautiful picture and a great find.

Thank you for posting it.

It's Pope Pius XII, right? Very nice of you to publish this for our edification, as well as to preserve such treasures from obscurity or worse.

I just finished a portrait study of Pius XII. I wondring if you like to critique it. If so, should I send a copy via the listed email address at the top of this blog?

Al, yes, I would be delighted to take a look at your portrait study. Here's my address: orbiscatholicus@libero.it
Many thanks...